Hi friends and welcome to Day 60 of this monumental, inconceivable and definly memorable blind sightseers tour….!

Welcome to Bonaire on this fantastic occasion…I wonder what surprise is in store for Sarah? 🤔

This trip is all about getting to grips with Bonaire’s historic best bits. Clamber aboard one of the 4x4s, and in a couple of minutes you’ll be whizzing along the off-road trails.
First, you’ll climb into the Subi Rincon hills, where the convoy will stop at a set of time-worn Indian caves. Then, it’s on to one of the island’s only two towns – Rincon. Keep an eye out for the honey-yellow church tower as you pass through, then hop off the truck when you arrive at pretty Boca Onima. This rocky stretch of coastline is home to some of the best cave art in Bonaire, which gives you a real glimpse of the island’s past.
One of the best bits is saved ‘til last – the beauty spot, Seru Largu. This cross-topped monument sits on a raised platform, setting you up with panoramic views of the capital, Kralendijk.

This shore excursion was a second choice as the first choice was sold out weeks before we’d even started our cruise. We were thinking about the 4×4 Land Rover trip we’d done in the Azores(see here) but couldn’t really get excited…As it was much hotter here and the thought of being crammed in the back of a Land Rover really wasn’t doing anything for us today. So what we thought was going to be an anticlimax…Turned out to be the best trip of the whole holiday! Oh and i’d just travelled in my best vehicle of all time! 😎 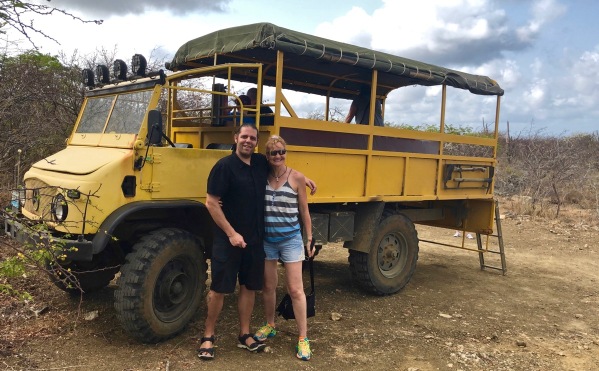 Awww friends….Let me introduce you to this Yellow, 1961 Unimog…..have you seen the tires, lol! It threw us around like crazy and i still can’t believe that he didn’t slow down for anything. There is no way a vehicle can hit rocks, huge pot holes, climb cracked hills and go around tight bends whilst travelling at break neck speed, it would have destroyed anything else and left them in a pile of spare parts, lol. I’m not sure they issued these with brake pedals! 😎

Bertrand was our fantastic guide, and even better rally driver, lol. He said he had a PHD(pot hole dodger) although he didn’t dodge anything but drove straight over everything which made the ride so much fun…We were all hanging on for dear life as our bums were ‘getting air’ as they lifted off our seats!!

We  climbed higher and higher into the Subi Rincon hills, where the amazing yellow Unimog stopped at a set of time-worn Indian caves. This place had lots of rocks to walk over and Bertrand told Sarah “You’re a fantastic guide” as she was expertly weaving me through the rocks! He told the group how the first explorers crawled through these caves in the pitch black, an inch at a time without knowing what was coming. 😨

Back on the Unimog…

Bertrand put the ladder in place at the rear of the Unimog so we could climb in and out. I was very careful the first time as i was feeling with my feet to find out how many (and where) the steps were. But after a few times i was flying off them! 😀

He kept slowing down and then (klunck) slamming it into low gear as he climbed ludicrously steep and rocky slopes until we got to a high viewing point. Ikept forgetting it was Sarah’s birthday and not mine! 🤣

We were screaming down a dirt track when Bertrand hit the breaks. He jumped out of the Unimog and tried to call out to the Donkeys to see if they’d come over. He told us:

Donkeys have been around on Bonaire since the 17th century. The Spanish brought the donkeys for transportation. When modern vehicles became available like pushcarts, donkeys were redundant and left to their fate.

Bonaire is a predominantly rugged and arid island, making it difficult for the donkeys to survive. Nevertheless, there are hundreds of donkeys on Bonaire present. Because the donkeys can move freely on the island this regularly leads to traffic accidents.

Fauna ezel thumbThe donkeys live in small herds of about 20 animals and can be 40 years old. During the day they seek the shade of the trees. In the early morning or early evening the donkeys are usually active.

Since 1993 injured, sick and orphaned donkeys are cared in a shelter, called Donkey Sanctuary Bonaire. Volunteers take care over 400 donkeys in a closed area. The shelter is open to visitors and is located south of the airport on the Kaya Ir.R. Statius van Eps.

I heard “EEEYYOOORRREEE, HONK, HONK, HONK) and Bertrand said “Ok i hear you” to the donkeys and “They don’t want to say hello” to us as he climbed back into the Unimog and drove to our next stop…

Wait a minute…How did Sarah take a panorama whilst sat in the Unimog? “Nobody likes a show off, lol” 🤣

After another blitzing ride we parked at the beauty spot, Seru Largu. We walked up quite a few steps to get to the top, but it was worth it!

This beautiful place sits on a raised platform which set Sarah up with panoramic views of the capital, Kralendijk.

Bertrand stopped in many interesting places, he even fed lizards by hand as we stood on a sandy park burning to a crisp.

We’d had a simply breathtaking trip on the fantastic yellow Unimog and we were really sad when we pulled back into the dock.

Back at the ship…🛳

After the incredible and mind bending ride in the Unimog, we quickly went on board and had an iced coffee before heading out into the town to see what goodies we could find.

It was absolutely scorching so the first place was a tiny local bar where Bertrand told us to try the locally (and traditionally)  brewed beer ‘Bonaire Blond’. Sarah sat me down at a small table and soon came back with a birthday celebration drink…The 2 bottles of ice cold Bonaire Blond. The bottles were soon empty as the room was just too hot and we needed to get back outside.

Yay, we managed to buy another bauble for our Christmas tree…Oh and i bought another bright and colourful shirt that you’ll see at a later date! 🎄  😀

As we walked into the usual evening restaurant we were guided to our seats. Sarah said “Steve i think we’ve sat somewhere we shouldn’t, it looks much posher here and even the napkins are red instead of white”. After a few more seconds Sarah continued “Oh have you done this? Have you booked me a surprise birthday meal? I bet you’ve done this!” I’d kept quiet so far wondering myself what had happened, and wondering if i should tell Sarah that i had booked a special table for her birthday even though i hadn’t, lol!
“No i havn’t booked anything special but i wish i had now” i said as the waiter brought Sarah the menu. Sarah used the built in magnifier on her iPhone to read the menu aloud “It’s the italian restaurant, you’re going to love this” “No way i thought you had to book for this one” i said wondering if they did Arancini (they did).
The Italian restaurant was free like the main restaurant, the only difference is that you had to specify that you wanted to eat there which we hadn’t. We still think they knew it was Sarah’s birthday and sat us there without saying…But we still don’t know and it was a lovely surprise for Sarah’s birthday. 😀
Then…
DING…DING…DING…DING…BOOM!!😋

YAY, It’s Sarah’s bell from her ‘Blind Sightseers Gastronomic Leaderboard’. Moving straight to the top of her ‘Desserts’ leaderboard were the sugar free Profiteroles. Sarah said they tasted amazing and never seen any of these anywhere that were sugar free and didn’t mess her blood sugar up. We told the waiter how good they were and soon the chef came over and chatted to us as we thanked her too! 😀
Now that was a fantastic ending to an even greater day! Happy Birthday Sarah!! ❤️❤️❤️ I LOVE YOU!! ❤️❤️❤️ 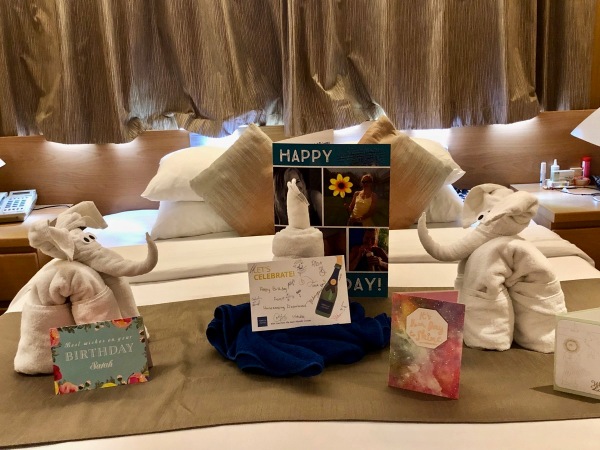 Thanks for joining us on this fantastic day on Bonaire! Have you been here before? Have you ever been in/on a Unimog? 🤔
We’ll meet tomorrow…Same time…Same place for another adventure! 😀
⬅ Previous Day 🌴 Next Day ➡

A Journey of a Type 1 Diabetic's Life

Together let's focus on learning from our Father at His feet, as His dear children.

Lisa is running a marathon - Be Right Back

Traditional Living for the Glory of God

My journey of food, travel and inspiration

Weight Loss one calorie, one step at a time.

Running and baking; half marathons and cake

These are a few of my favorite things...