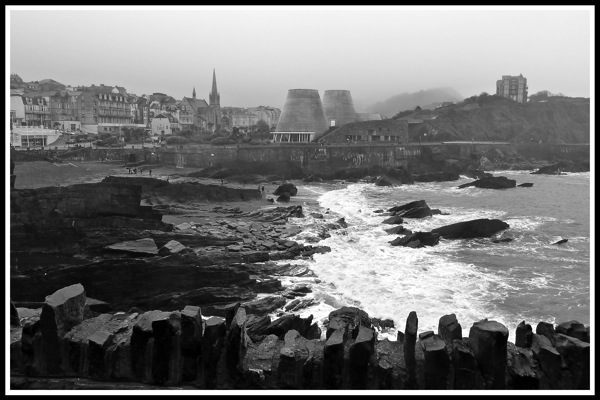 Brief description: Photograph taken in a huge storm with my iPhone 4s camera. (I wouldn’t get my Nikon camera out of it’s bag as the weather was too bad). I’ve applied a grayscale effect to bring out how I felt on the day (very wet, cold and shivery). A great memory of the English southern coast on New Years Day.

Brief description: Stood close the Eye looks big but through the wide angle lens of my Sony Alpha a100 camera it felt like a huge bike wheel in the sky ….very sureal.

Aim of the work. Looking at life from a different angle. 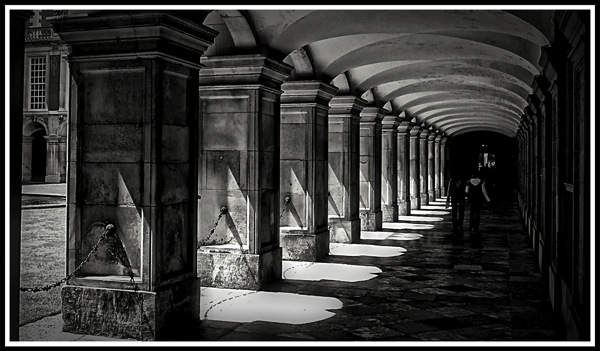 Brief description: One of my very first photos taken as blind photographer. Taken with a Fugi F10 camera. I was visiting Hampton Court Palace and was struck by the contrast between the heat in the sunny parts and the cool in the the shadows when walking down this corridor. I wanted to reflect this in the patterns made by sunlight playing though the arches. I used black and white in this image to capture this feeling.

Aim of the work. To demonstrate the amazing effects sunlight can have on it’s surroundings.

Brief description: Walking along a peaceful, tranquil path by the canal I was taking shots of different things around me with my Sony Alpha a100 camera. I heard the rumble of this boats engine and took photos as it passed. On returning home and zooming into the images with my computer this one stood out, as when seen in detail there was much more in it than I had first thought. It captures a story of the man with his dog living a laid back lifestyle on the boat … all the materials of his life surrounding him. The photo I felt encompassed this mans life and told his story whilst also conveying the peace of the day and tranquility of my surroundings.

Aim of the work. A single photo that tells the story of this mans life – the more you zoom in the more you see.

Brief description A dramatic image of Portsmouth Cathedral on a hot but cloudy day.Taken with my iPhone 4 camera at a friends ordination ceremony.

Aim of the work. The ceremony was very grand and I wanted to capture the feeling of the spendour and grandeur of the ceremony and Cathedral in a photo. From experience I know that using black and white on architecture creates a dramatic feel, especially on a cloudy day.

3 thoughts on “My Exhibitions”

Because home wasn't built in a day.

The Cross in the Christian Life

She’s sunshine mixed with a little bit of hurricane

My Journey: An atheist to a Christian